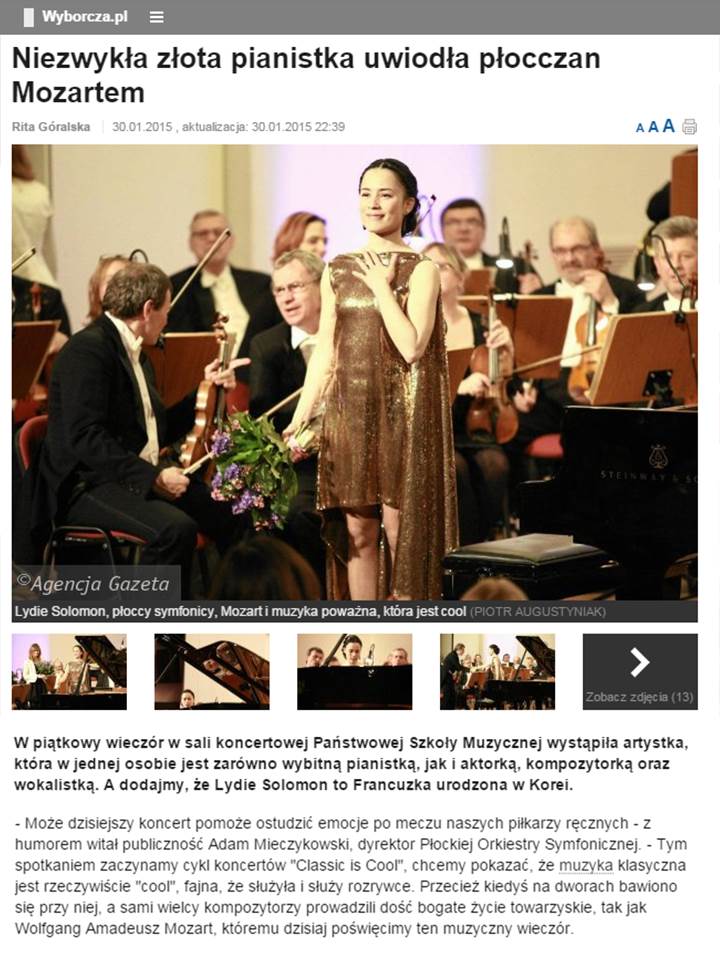 « This Friday evening in the National School of Music's concert hall an artist stood out, who is at the same time an outstanding pianist, as well as an actress, a composer and a singer. In addition, Lydie Solomon is French, born in Korea. »

« – Maybe today's concert will help calm down the emotion from our handball player's match – thus Adam Mieczykowski, Płock Symphonic Orchestra's director, welcomed the audience with humour. This greeting was the starting point of “Classic is Cool”, a concert cycle which aims at demonstrating that classical music is really cool, that it is meant to be played to please and to be pleased. In the past, however, people in manors enjoyed it, and the greatest composers led quite a rich society life, as did Wolfgang Amadeus Mozart, to whom today's musical evening was devoted.

The orchestra started with Adagio and Fugue in C minor, K. 546, in its 1788 string version. Then Lydie Solomon, the star of this evening, joined the orchestra. Altogether with the musicians, under the direction of Janusz Przybylski, she measured herself with the piano concerto in D minor, K. 466, dating from 1785.

– The concerto's beginning is characterised by Mozart's dramatic writing in the Allegro, while the central part is a Romance, the most beautiful piece in classical music history –  said Adam Mieczykowski about the concerto in D minor, K. 466, and one would find it difficult to disagree.

A star delighted the audience with her talent, but also with her beauty, as well as with… a lovely golden dress and tastefully matching bootees. All the musicians on stage received a standing ovation, and the remarkable pianist expressed her gratitude by singing a song by Chopin in F sharp minor on lyrics by Witwicki – “Smutna Rzeka [The Sad River]”. She created surprise with her Polish accent, and she did well in selecting it, since this artist is fascinated by Chopin, whose works she established a link with Cuban music in her new project “From Chopin to Cuba”, which came out onto the recording of a CD.

Lydie Solomon is a woman who has really been through a rebirth. She played her first concert with an orchestra at the age of 13, at Radio France. She completed the prestigious Paris Conservatory (in the class of piano), then she undertook business administration studies, after which she got an MBA in France at the ESSEC Business School. Later she cared about cinema, being admitted to follow courses at the private theatre school Cours Florent. She played the role of a pianist in the autobiographic long movie “Vivre!”. She sang songs of which she composed the music and the lyrics. In 2011 she came back to her first passion, the piano. And at the same time… she played the role of a criminologist in a French television series. »

– Concerto No. 20 by Mozart, second movement: