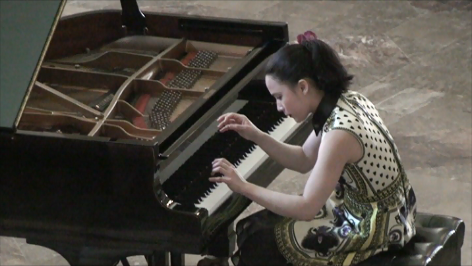 “Passionate about the music of the largest island in the Caribbean, the talented French pianist Lydie Solomon will perform for the first time in Cuba.

This will be on Saturday evening in the Oratorio San Felipe Neri, in the Historic Centre of Havana.

The next day the young virtuoso will be seen in the Teatro Tomás Terry, in the town of Cienfuegos, and will conclude her series of concerts next Wednesday in the Sala Gonzalo Roig in the capital’s Palacio del Teatro Lírico Nacional.

Invited by the Association Cuba Si France, the gala concertist will achieve her desire to share with the Cuban audience a recital she made on May 11th, 2011 in the vintage salle Gaveau in Paris’s 8th district.

Introduced as Eldorado, the performance included a splendid journey with works from several composers of academic universal music, from baroque Spain with Padre Soler to Latin America with scores from Astor Piazzolla, highlighting works like Córdoba Gitanerías Malagueña by Ernesto Lecuona.

This concert resulted in a phonogram with the same title.

During a part of her stay, the young lady will exchange with personalities from the Cuban arts and letters, while she hopes to visit the capital’s institutions which promote French culture in the largest island in the Caribbean.

Lydie Solomon was born in Paris en 1981. She started to play the piano when she was two years old. At eleven, she won, among others, national prizes from the Steinway, Claude Kahn and Saint-Nom-la-Bretèche competitions, including the Grand Honorary Prize at the Radio France Competition.

As a testimony of her performances the cellist François Salque, with whom she worked on various occasions, recognised the deep culture, mastering of musical expression and sensitivity with which the new pianist is identified.

In 2011 she recorded a CD, where her voice expressed her own songs resulting from classical, jazz and latin musical influences, with the backing up of an American jazz trio and an Argentinian bandoneonist.”