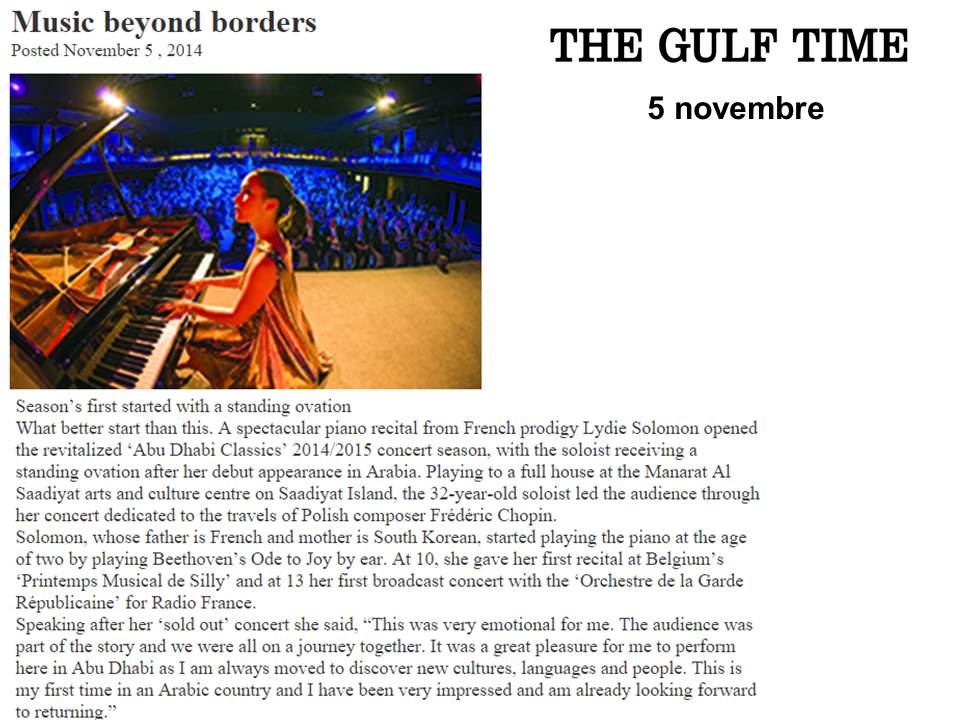 « Season's first started with a standing ovation
What better start than this. A spectacular piano recital from French prodigy Lydie Solomon opened the revitalized ‘Abu Dhabi Classics' 2014/2015 concert season, with the soloist receiving a standing ovation after her debut appearance in Arabia. Playing to a full house at the Manarat Al Saadiyat arts and culture centre on Saadiyat Island, the 32-year-old soloist led the audience through her concert dedicated to the travels of Polish composer Frédéric Chopin.
Solomon, whose father is French and mother is South Korean, started playing the piano at the age of two by playing Beethoven's Ode to Joy by ear. At 10, she gave her first recital at Belgium's ‘Printemps Musical de Silly' and at 13 her first broadcast concert with the ‘Orchestre de la Garde Républicaine' for Radio France.
Speaking after her ‘sold out' concert she said, “This was very emotional for me. The audience was part of the story and we were all on a journey together. It was a great pleasure for me to perform here in Abu Dhabi as I am always moved to discover new cultures, languages and people. This is my first time in an Arabic country and I have been very impressed and am already looking forward to returning.”
She had further expressed, “I love Chopin and I feel really connected to him. Since my youngest days aged around ten or 11, I have felt a connection with his extreme sensitivity and most of the pieces I play describe the way I feel. Chopin was a great traveller and I love taking the audience from one place to another and from one state of mind to another. The success of a concert for me is when audience embark on and finish a journey with me. ”
Talking about the audience response on the first performance of the season, Dr Ronald Perlwitz, Head of Music Programming, Culture Sector, TCA Abu Dhabi, said the evening was an outstanding success and showed the level of talent that has been attracted to perform in the Emirates during the Classics season. “Lydie's performance was a stunning start to the Classics season. The audience was treated to a masterful display of her ability, and this curtain-opener bodes extremely well for a series which has been very well received on the classical music circuit, both regionally and internationally”, said Dr Perlwitz. »