“CLASSICAL Our time hungers for prodigies: France Télévisions is preparing a new TV show for the under 16s.
And the Cité de la Musique is celebrating the child Mozart. Investigation.”

“An extraterrestrial at the conservatory” 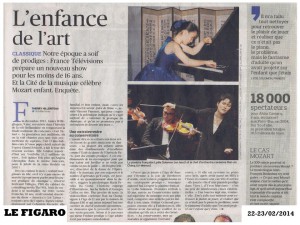 “« Because I played Ode to Joy by ear when I was two, I was grabbed and labeled prodigy », today regretfully testifies the French pianist Lydie Solomon. First recitals at 10, admission at the Conservatoire National Supérieur de Musique three years later, relentlessly compared to her elder Hélène Grimaud who was propelled like her at adolescence, she claims that she suffered more from her situation than she reaped the benefits of it. « At the conservatory, my classmates used to call me the extraterrestrial. » Even if she came back to the piano with panache, after getting an MBA at ESSEC and starting an actress career – she played the role of a piano prodigy in Vivre !, by Yvon Marciano – it was at the cost of numerous existential crises. « One every seven years, she says with irony. I had to clean up everything to find back the pleasure to play and realize that the problem was not te piano, but the fantasy adults had projected on the child I was.»“