« Płock's music lovers thanked Lydie Solomon with a standing ovation for her magnificent performance of Wolfgang Amadeus Mozart's piano concerto. Obviously, the audience could not do without an encore. » 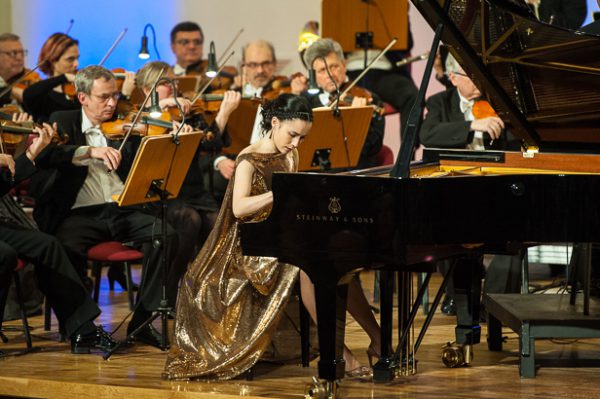 « As the artist sat down once again at the piano, she surprised all who had gathered in the National School of Music's concert hall. She performed Frederic Chopin's song “Smutna rzeka [The Sad River]”. There would have been nothing extraordinary to this, had Lydie Solomon not only played Chopin's song on the piano, but also sung it (the lyrics' author is Stefan Witwicki).

Lydie Solomon, who is not yet 23, has been living in France for five years. However she was born in Korea, where she also recorded her first CD. The young pianist received an unusually careful musical education. She also got an MBA in an elite Parisian business school and completed an actor's education.

She gave her first concert with a symphonic orchestra as from the age of thirteen. She counts up performances in the most prestigious concert halls. Her brilliant career is not exclusively restricted to the one of pianist. She recorded a CD in which she also performed the vocal part with an American and Latin rhythm section. She also acted in the long movie “Vivre!”, directed by Yvon Marciano.

In Płock the young French artist performed the piano concerto in D minor by Wolfgang Amadeus Mozart. The piece, in three parts, opens and closes with an entirely dramatic allegro. The second part – romance – which can be heard in Milosz Forman's long movie “Amadeus” is recognised by critics to be one of the most captivating, among all the works by the brilliant Austrian composer. Lydie Solomon played Mozart's concerto with grace, delicacy, embarking the audience into the most wonderful landscapes of musical feelings. No doubt that nobody could feel indifferent to the artist's great class, as they could ideally read each detail of this significant work.

This Friday evening ended with the Symphony in C major “Jupiter”. Some Mozart experts consider this work to be the composer's musical testimony. The Symphony was composed in a way that all instrument groups collaborate together, while at the same time each one is given the possibility to display its skill. Under Janusz Przybylski's conduction, the Płock Symphonic Orchestra had the opportunity to offer its better side. And the audience, in harmony with the cycle's title, could actually admit that “Classic is Cool!”. »