« Since she started learning piano at the tender age of two, Lydie Solomon has risen to stardom in the classical music industry, giving her first performance at just 10-years-old. The award-winning French pianist will open the 2014 – 2015 Abu Dhabi Classics season with a special tribute to Chopin. We caught up with her between concerts. »

« You began performing at a very young age. Do you think music and the arts are important for children?

I think music and art are very important to develop children's sense of discipline, but also their sensitivity and generosity as well as their personality. But performing at a very high level at a young age can be dangerous if the only thing children are taught is the sense of competition, which is based on comparison and ranking. Art is made of creativity and diversity.

You've performed in various countries during your career. Do you find inspiration in foreign culture and music?

Yes, definitely. When I toured Cuba two years ago, I was totally immersed in Cuban music. This allowed me to discover the links between Chopin's music and Cuban music, which led me to my new album De Chopin à Cuba. In Mexico, I discovered a musical expression full of exaggeration, inspired by their rich baroque style of the past.
All these encounters allow me to discover new possibilities in my piano expression. So I am very excited that Abu Dhabi Classics has offered me the opportunity to play for the first time in an Arabic country, and to give a master class to music students. I am confident that this experience will lead me to new musical and human discoveries.

What is it about classical music that inspires you?

I discovered Beethoven when I was still in my mother's womb. It's no wonder why at the age of two, I played ‘Ode to Joy' by ear on a piano. Beethoven showed me the path to other classical music geniuses like Mozart, Chopin, Brahms, Prokofiev, Rachmaninov and Ravel. As a little girl, there was nothing stronger than what I felt when I listened to this music. Later on, I discovered other musical cultures like jazz and Latin and Tibetan music, and I am very eager to discover more about Arabic music. Man's genius is borderless!

You're also a film and TV actress. What prompted this crossover?

At the age of nine I loved making up stories and involving my friends in role plays, with a stage setting and costumes – incidentally I discovered later that Chopin used to do the same. This was an artistic expression which only belonged to me: no judgement, no ranking. When I stopped my piano career, my need for artistic expression naturally led me to acting. Acting taught me that when I am on stage for a concert I have to tell a story to the audience.

Your recital at Abu Dhabi Classics, which is dedicated to composer Chopin, will open the season. Tell us a bit about your inspiration behind the performance.

When Chopin left Poland he was looking for universal fame. He could never return to Poland and during all his life he suffered from this. Being far from his beloved native land exalted his suffering and transformed it into a universal music with strong roots. Wherever he travelled in Europe, be it in Warsaw, Stuttgart, Majorca or Nohant, his compositions reflected his ‘cultural universality'.
With my multicultural background (my father is French with Romanian roots, my mother is Korean), I always look for a change of scene when I travel. And in each country I play in a different way.

What can we expect from the performance?

I guess the public in Abu Dhabi has strong expectations about the Abu Dhabi Classics season, as it will be the first one after three years! What I hope is that the audience and I can share a moment of intimacy and strong emotions. And I hope everyone will feel they are part of the story. » 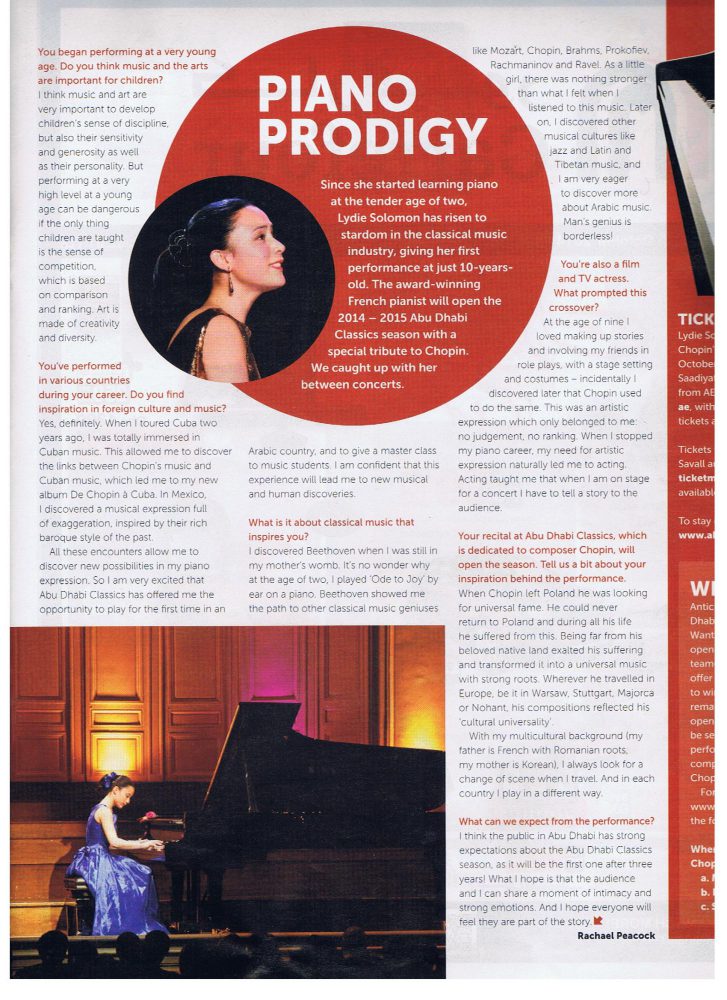